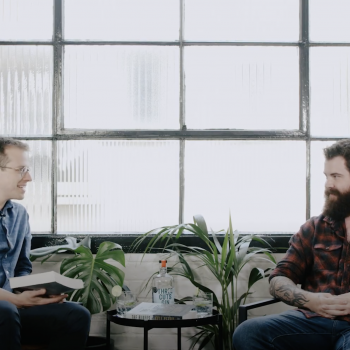 “We are giving some of Tasmania’s brightest writers in diverse genres the opportunity to reveal their stories globally on the digital page.

“We have filmed the podcast to give the viewer the sense they are at home with the author."

The first round of podcasts will include a conversation with Robbie Arnott, who currently has two novels in the Top 10 best-seller lists and has just been awarded the University of Tasmania’s inaugural Hedberg Writer-in-Residence scholarship; comedian and actor Dylan Hesp; 2020 Vogel Award-winning author Katherine Kruimink; and Stella Kent, revealing the back story to plotting plays. Already available is a conversation with The Bluffs author Kyle Perry (watch it here).

“We are excited to be back in planning mode,” Ms Machen said.

“It’s imperative to maintain branding momentum but, more importantly, now more than ever, it is important to give a voice to creative talent in this state, it’s important to offer intellectual engagement as well as entertainment through conversation and exchange of ideas.

“From a strategy workshop we held in August it became abundantly clear during robust discussion that to put the Festival in mothballs until 2022 would risk sustainability of the Festival.

“It’s amazing how a couple of month’s forced hibernation can channel collective thought,” Ms Machen said, in reference to the Covid-19 self-isolation regulations and closure of Tasmania’s borders.

“Our Festival was almost fully programmed  with tickets due to go on sale in June, but with our focus being on welcoming mainland writers to Northern Tasmania and encouraging visitation to the Tamar Valley, the borders closing threw almost every element of our program into disarray.

“Fortunately only a couple of mainland flights had been book rather than our full entourage of guest speakers.

“As with all event organisers we were in close consultation with Events Tasmania, our major funding partner, and it was agreed the Festival should be cancelled rather than consider postponement.

“The Festival until now has been organised 100 per cent by volunteers and as the pandemic began to take serious hold in mid-March I felt it was in the best interests of everyone that there be no distractions other than staying well as individuals and being with our families."

In 2016 the Festival was the recipient of $180,000 funding over six years from Events Tasmania as part of its Major Event Partnerships Program. This tranche of funding will conclude with the 2022 Festival. The Writers Festival  has also enjoyed strong support from the West Tamar Council and other Northern Tasmanian businesses. The most recent Tamar Valley Writers Festival was held in September 2018 at the Tamar Valley Resort, Grindelwald, with almost 2000 patrons attending the three-day event.