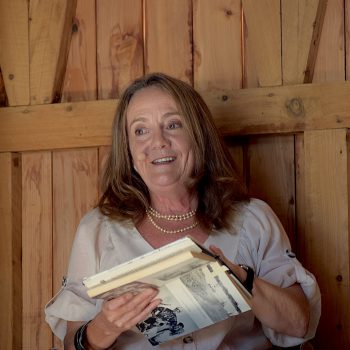 Our sell-out event with international bestselling author Katherine Scholes at Waterton Hall was a great sun-bathed success on Sunday.

Seventy patrons joined on the lawns in front of the convict-built barn, now a rustic function space and part of the beautiful Waterton Hall estate at Rowella. They were served sparkling wine and the option of gin tastings from Turner Stillhouse, and those who wished to were treated to a tour of Waterton Hall itself. Petrarch's book store was selling all of Scholes' popular books, and Moon Lily Kitchen and Cakes served a delightful afternoon tea once everyone was seated.

But by far the highlight was the conversation that unfolded between Scholes and former ABC broadcaster Annie Warburton. The fact that the two inspiring women are friends was obvious by the candid and engaging conversation that unfolded. Scholes recounted her youth growing up to missionary parents in Tanzania; her father a doctor, her mother an artist. She shared the joys and the hardship of living in Africa, the reason they migrated to Tasmania and why, even today, Tanzania holds a special place in her writing career. Scholes brought along her first ever book 'published', scribed in her own hand as a girl, and shared how her author journey began, with The Rain Queen being picked up by publishing giant Penguin quite quickly.

Scholes was a generous speaker, taking questions from the audience before signing books and chatting with anyone who wished to linger.

The Tamar Valley Writers Festival committee is grateful to all who helped bring the event together, including the team of volunteers. We look forward to announcing more events of this calibre throughout the year ahead.

View photo gallery from the event