Flanagan talks in Launceston this Saturday 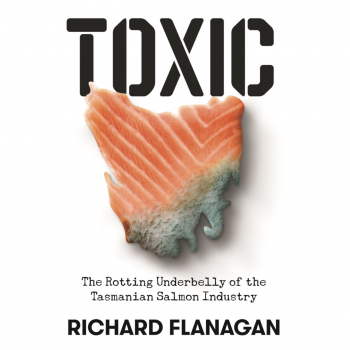 Richard Flanagan’s latest book, an exposé of the salmon farming industry, has sparked heated debate in Tasmania and around the country since its release just three days ago.

Toxic: The Rotting Underbelly of the Tasmanian Salmon Industry is a powerful critique of an industry he says ‘is as secretive as its practices are destructive and its product disturbing’. Toxic is already prompting comparisons with Rachel Carson’s groundbreaking 1962 study of the pesticide industry, Silent Spring.

This weekend the Sydney Writers Festival is presenting Richard Flanagan in conversation with the ABC’s Laura Tingle. This arrangement preceded the publication of Toxic, but the explosive new book and its controversial subject matter are bound to be the focus of their discussion.

For Tasmanians keen to hear it, and in association with the Sydney Writers Festival, the Tamar Valley Writers Festival will livestream the session at the Star Theatre, Invermay, in Launceston, on Saturday from 4pm to 5pm.

Flanagan won the Booker Prize for The Narrow Road to the Deep North and the Commonwealth Prize for Gould’s Book of Fish. His other recent book The Living Sea of Waking Dreams offers a tender haunting portrait of a world disappearing around us.

George Miller: Beyond Thunderdome will screen on Sunday, May 2 from 12 noon - 1pm, and

Miller is one of Australia’s best-known film creatives thanks to films such as Mad Max, Fury Road, Babe and Happy Feet. No doubt he will discuss the forthcoming latest incarnation of Mad Max, featuring Aussie golden boy Chris Hemsworth.

Pomeranz and Stratton have long been Australia’s favourite film critics and they reunite in this special SWF event to discuss movie adaptations of Australian books.

What: Richard Flanagan in conversation with Laura Tingle.

Where: Live-streamed from Carriageworks in Sydney to Launceston’s Star Theatre, Invermay.