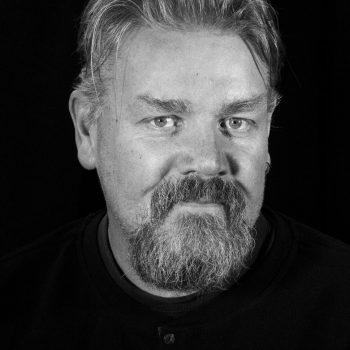 Cameron Hindrum lives, writes and works in Launceston. He has published a novel, two collections of poetry and had two plays professionally performed in Tasmania. He recently completed a Doctorate of Creative Arts through the University of Wollongong, and is currently working on a script commission for the Launceston Youth Theatre Ensemble. He is a regular contributor to Mudlark Theatre's One Day project, whereby short plays are written, rehearsed and performed in a 24-hour cycle and for 17 years until 2019 he coordinated the annual Tasmanian Poetry Festival.

I usually have a couple of different things on the go. I recently finished work on a Creative Writing doctorate so that has freed me up somewhat! I’ve returned to tinkering with a collection of poems and story fragments which I hope to finalise and submit to a publisher this year, and my other major focus is a commission to write a script for the Launceston Youth Theatre Ensemble, to be performed next year. That’s going to be epic—essentially a trilogy of plays, one for each main LYTE ensemble and a huge cast of very talented and passionate young actors. There is also another novel idea hanging around in the background, hoping I’ll eventually pay some attention to it.

It really is a place of extraordinary beauty. My family and I often go swimming down at Lagoon Beach, Low Head, and the drive there is always obscenely pleasant, as the valley slowly unfolds in front of you. What an absolute privilege it is to have fine food and wine available right on our doorstep. I will always be proud of the community activism and protests that were influential in having the notorious Gunns Pulp Mill development stopped in its tracks. That sort of committed dedication—which is stamped into the DNA of many Tasmanians—is in itself influential and very inspiring.

Fundamentally I am always fascinated by what makes people tick. What is it in our behaviour that influences relationships and helps create our senses of self? In both of the two plays I’ve written this has manifested itself in examinations of fatherhood, although the net is cast a little wider in the novel I have just finished for my doctorate, The Sand. This is based on an infamous Tasmanian cold case, the as-yet unsolved murder of Victoria Cafasso in broad daylight on an east coast beach in 1995. It explores how trauma can be the catalyst for us to find resolution for other issues in our lives, and how a small regional community reacts to a sudden and shocking act of violence. People are very often simultaneously flawed, sometimes quite deeply, and also capable of great compassion and empathy. I think, overall, I’m interested in trying to explore just how that works at the level of daily interactions, resilience and so on. The first decision I made in starting to write The Sand was not that I would not attempt to neatly resolve the murder, and indeed I’ve remained true to that—which is an attempt to reflect the often messy and confronting reality, that we have to find ways to resolve things that are not resolved.

I am extremely fortunate in that I have a splendid home office, lined with books. Over last Summer a builder and I renovated our garage in order for me to use it this way—I had bought too many books to remain adequately accommodated in the smaller space I had been using inside the main part of our house. (Actually, even with the expanded premises, I still don’t have room for all of my books—keep your eyes peeled for news of some giveaways! I would say that I have too many books, but genuinely I don’t really think that’s possible.) My little Writer’s Cave is very cosy, and even features a dedicated reading chair which was a dentist’s chair in a former life, picked up for an absolute bargain at Andy’s Salvage in Mowbray. Often one of our cats will keep me company while I am in there, being affectionate in the hope that I will stop what I am doing and feed her (again).

5. Finish this sentence, "What Tasmanian writers need is..."

This could be a long list, but I will assign priority to:

There have been some excellent reads but two have stayed with me, and it occurs to me now that they’re both about loss in very different ways. Truganini: Journey Through the Apocalypse, by Cassandra Pybus is a compelling reminder of the price that’s been paid to allow us to live where we do. The debt can never be paid in full but we should engage with the place where we live, with its brutal histories, with open hearts and minds. The other is The Living Sea of Waking Dreams, by Richard Flanagan—a deeply profound, troubling, beautiful novel about loss and the part that we as a species have played in it, rendered in some truly mesmerising prose with a vastly powerful central allegory. Honourable mentions go to The Fire of Joy by Clive James, which is a collection of his poems that he memorised during the course of his life, each of them accompanied by a superb little essay in which he discusses the poem and/or its meaning to him, and to Squeeze Me, the latest novel by American crime writer Carl Hiaasen—very funny as all of his Florida-based crime novels are, taking square aim at the Trump Presidency and its many, many, many failings.