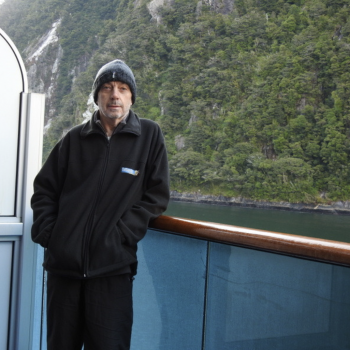 Ian Kennedy Williams is the author of three novels and four collections of short stories. He has also written for the stage and worked on film and TV initiatives for Screen Australia and Screen Queensland. His work has garnered numerous awards and he is a recipient of an Australian Film Institute nomination for screenwriting. Born in the UK, he has lived most of his adult life in Australia. In 2009 he and his wife Liz left steamy Brisbane for the more salubrious climate of Tasmania.

I’m currently revisiting a longish story I included in my last collection Leaving the Comfort Zone. It’s about a rookie police detective’s obsession with a young woman’s suicide, the woman’s relationship to the household where she was employed and the property’s connection to a double suicide that occurred there in the 1930s.

The story, even at around 11,000 words, always seemed ripe for development, so I’m seeing if it has the scope to work as a short novel. I’ve introduced a backstory for the detective, which will play into the main narrative, and a subplot that at the moment could go anywhere. Or nowhere.

The narrative crosses genres, drawing on gothic and supernatural tropes as well as from the detective story. There are narrative and time shifts and differing points of view, though the focus is primarily on the detective — the more deeply she delves into the story the more she becomes a part of it. Whether it all comes together is another matter. It’s early days.

For the migrant, the question of home can be a point of contention. Is ‘home’ forever rooted in the place of birth and childhood, or is it the adopted place, the place of settlement? For the rootless, I guess, it’s a perennial search for a sense of belonging.

I’ve lived, at various times, in five different Australian states, which implies a degree of rootlessness. Even a long sojourn in the one place can seem, in retrospect, as if it were simply a stopping off point on the journey to somewhere else. All the places I’ve lived have had some influence on my writing, though mostly from a geographical perspective. Which is to say I set my stories locally and draw on a particular sense of place to shape the narrative. This, I note, often involves characters wrangling a sense of restlessness.

After thirty years living in the subtropics, moving to the Tamar Valley felt a bit like coming home. The landscape resembles my native West Country and Launceston (named after the Cornish town) has much in common with Bristol, another old seaport. My recent writing has diverse settings, but it occurs to me that there has been a subtle shift from stories about leaving to ones of arrival.

I’m not an ideas or issues writer though, as noted above, the social setting or a particular environment can influence the stories I write. My novel Regret was about the fallout from a pig shoot, a character drama set against racial tensions in a declining mill town on the NSW north coast. My writing process is to start with a character or situation and work outwards from there.

Patricia Highsmith is said to have resented being referred to as a crime writer; she was, she said, interested in guilt and how people dealt with it. Transgression is something that has always interested me, the way otherwise good people are drawn to or manipulated into doing bad things. I’m also interested in the outsider’s perspective, the role of the disinterested bystander, the recorder rather than the participator. Sometimes this means playing the unreliable narrator, which opens up all sorts of narrative possibilities.

Generally, though, I’m mostly interested in exploring character pathology, what makes people tick. Someone once described my stories as miniaturist (approvingly, I think, though you can’t always tell). Some writers like to record the big picture. I like to focus on the moment.

A three bedroom house inhabited by two adults and a cat means I have a room in which to write. It’s a small room with a long desk to one side supporting two aging computers, a printer, paper trays, and, tucked in the corner, my father’s war service medals. Bookshelves hold mostly reference works, which sadly, if inevitably, the internet has made largely redundant. The shelves also hold various knickknacks collected over the years, family pics, postcards and a ship in a bottle (actually a bulbous clear glass cider flagon, the sailing clipper set into the bottom of the bottle not the side as is usual).

Across from the desk are two small filing cabinets, a shredder and a cd player sitting on a sewing cabinet that still contains thread, chalk, scissors etc from my late father-in-law’s tailoring days. On the wall are five framed certificates for writing awards, my wife’s Sao Award (Senior Admin Officer), two of my grandfather’s paintings, a pair of antiquarian prints depicting the Americas and two prints of Weston-super-Mare (where I grew up) circa 1851.

The solitary window overlooks a hedge-rimmed garden and a main arterial road, generally quiet except for twice a day when kids are being ferried to and from school. Across the road, a little to the left and behind a stand of towering pine trees is Carr Villa cemetery, home to the dead, dog-walkers and the occasional hoon on a trail bike.

Subvert expectations. Which is not to suggest implausible resolutions, rather that stories exploring the lives of complex characters should never be predictable.

Be authentic. The stories and characters depicted should ring true, which means engaging different literary forms as the narrative demands.

And finally, dare I say, appear easy. Yeats, in his poem Adam’s Curse put it best. ‘A line will take us hours maybe;/Yet if it does not seem a moment’s thought,/Our stitching and unstitching has been naught.’

I read recently that men generally don’t read fiction written by women. That was something of a revelation to me as probably 90% of the novels I’ve read over the last few years are by female authors. I did revisit William Trevor, an early favourite, catching up with his later novels that had passed me by, but for me the standout authors of recently reading are Elizabeth Strout and Anne Enright.

Both are very good at families, particularly the fractious relationships between siblings. Strout particularly has the gift of drawing you into the story as if she were telling it to you personally. I’ve just finished Enright’s The Green Road, which is probably my most enjoyable read this year. Both writers have a light, wry touch, but Enright has the comic edge with the sort of lines that make you think, ‘I wish I’d written that…’

I also read Before You Knew My Name by Jacqueline Bublitz, an interesting take on the traditional murder mystery, one that gives the victim agency over her life and demise. Not so much a crime story as a meditation on death, loss and healing, it is, for the most part, a rewarding read.

Currently I am reading Broken Spear: the untold story of Black Tom Birch, the man who sparked Australia’s bloodiest war by Hobart writer Robert Cox. Meticulously researched and written with the novelist’s flair for narrative, it’s a thoroughly absorbing biography of one of the most significant Indigenous Australians in Tasmania’s colonial history.