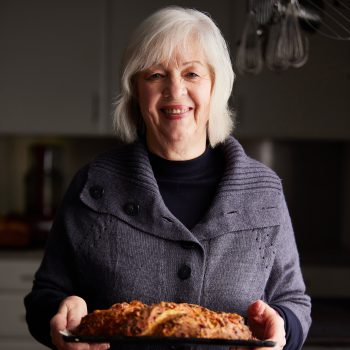 Food & Words to Warm the Heart offers a convivial afternoon of lovely conversation — ranging from recipes and pantry secrets to reminiscing aplenty with her good friend and former ABC Radio presenter Chris Wisbey. These days Chris, with his partner Sally Dakis,  operates a 3500-tree cherry farm in the State’s south.

What would a Sally Wise event be without delicious food, and the ticket price includes a traditional afternoon tea. Alcoholic beverages will be available at bar prices.

Tickets are $35 each. Be sure to book your place quickly as seating capacity at the Rowella Community Hall venue is limited, due to Covid-19 restrictions.

This event is supported by Petrarch's Bookshop, and copies of Sally’s book will be available for purchase signings.

FOOD & WORDS TO WARM THE HEART Sally Wise OAM is a living legend of home cooking. She was the 2019 Tasmanian Senior Australian of the Year, and is known as 'Tasmania's favourite nan' for her popular cooking school set in the picturesque Derwent Valley, bestselling cookbooks and decades-long regular spot on ABC Radio. When she is not running cooking demonstrations at food festivals or community events, or furnishing the local work-from-home group, 'The Custard Club', with innovative cakes, she can be found teaching locals, tourists, prisoners, young adults, children - anyone! - how to turn simple ingredients into comforting meals. Chris Wisbey is best known in Tasmania as presenter of ABC Radio’s ‘Weekend’ programmes. Especially the Saturday Morning talkbacks where he was Peter Cundall’s hearing aid for two decades and the ‘Jams and Preserves’ segment with the legendary Sally Wise, who he would like to think, in a small way, helped take her from ‘passionate but unassuming’ to her status as ‘Australia’s bestselling cooking writer’!

Chris grew up in Southern Tasmania, took a ‘Gentleman’s degree’ at UTAS (extended…), worked in the West Coast mines and found himself studying Performing Arts and working for the ABC in Townsville. Starting of as weather-boy in the 7o’clock news and eventually presenting the bulletin and that forgotten classic of North Queensland Current Affairs; 'Points North'.  When Evening Radio started in Queensland, Chris took over and remained in radio for 38 years, working in at least 12 locations including presenting the national daily ‘Morning Extra’ and the long running ‘Australia All Over’ from Sydney.

Chris and his wife, Sally Dakis, both retired from the ABC over two years ago now. They have two daughters studying at tertiary level, and are trying to stop running a large commercial cherry orchard and Peony farm just outside of Richmond.