The Making of a Magpie: Writing Tamar The Thief 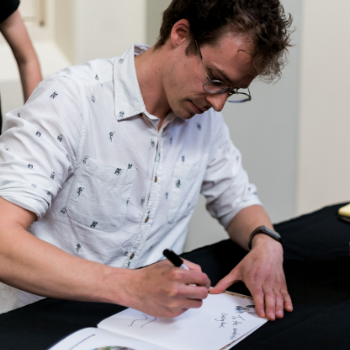 Tamar the Thief is an e-book that was commissioned and created by the Tamar Valley Writers Festival to be shared for free with schools, families and readers everywhere.

The project was the vision of the festival’s artistic director Georgie Todman, who brought together in collaboration two Launceston-based creators: writer Lyndon Riggall and artist Grace Roberts. In this blog, Lyndon shares his insight into how the book came to be, beginning with his experience writing the book.

I have always loved magpies (Go Collingwood!). I love the beautiful pattern of their black and white feathers, the wildness of their eyes, the wardle argle oogle sound they make when they sing of the morning’s arrival… to be honest even their swooping (which luckily we don’t see much of in Tasmania) is fascinating to me. Where I sit to write each morning, above me is an artwork by Graeme Whittle (who I created my first picture book, Becoming Ellie, with) called The Song of the Magpie. When Georgie, Grace and I met, I told them of my love for these birds, and we talked about different ideas for what we might create, including having a magpie visit Tasmania from the mainland on holiday!

For me, the first step was always going to be the story. I wanted to know what we, as readers, learn when we turn the final page. In European folklore there are so many tales of magpies being thieves… there is even a famous opera about it! In actual fact, magpies aren’t nearly as interested in shiny objects as we are interested in making up stories (which makes me wonder if some of those famous tales aren’t really just good excuses for when we lose our car keys). Nevertheless, it is true that magpies have been known to steal the odd shiny object to add to their nest.

When the creative team behind Tamar the Magpie returned back to our houses, we began playing with ideas privately, and one day my phone buzzed with an image attached from Grace. It was a sketch of a magpie, but there was something special about her… she had the most startlingly human expression on her face. It occurred to me that she looked like I do when someone tries to talk to me while I’m really hungry! That was when Tamar came to life for me. In that face I saw jealousy, and stubbornness, and I knew that this little magpie would do almost anything to try and keep up with everyone else. I realised, suddenly, that as her house grew more and more crowded with the things hoarded away inside it she would get less and less happy with every passing day as the guilt weighed on her wings. From that point on I knew I had the course of Tamar’s journey.

Tamar’s tale is really about the fact that sometimes we get confused about what we really need. Tamar isn’t wrong that there is something missing in her life, but like so many of us she tries to fill that hole with things, when what she really needs is a friend. It was very important to me that she found a true friend by the end of the book, and I can’t think of a single creature more deserving of the title than Luka the kookaburra. Luka is patient with Tamar. He doesn’t fight her when she convinces herself that all of the things that she has collected in her house are going to make the other birds like her. He doesn’t try to make her throw anything away. He waits patiently for her to realise for herself that the life that she is living is not the one that she wants, and guides her thinking by being the best example of a better way of living that he can possibly be. The story tells us that Luka knows that any friend who only wants to visit you because of the cool stuff that you have isn’t a true friend, but he doesn’t have to say that. That’s probably what I love most about him: he believes that Tamar will make the right choice if he just cares about her and gives her the time and space to think about what will really make her happy.

I am really proud of Tamar the Thief. With Georgie’s passion and hard work to bring the project to life, the enthusiasm of our festival director Mary Machen and the Tamar Valley Writers Festival committee, and of course Grace’s captivating illustrations, I think that what we have created together is a book that people of all ages can love, and laugh at, and even learn from.

The best news of all? In the book Tamar realises that holding on to beautiful things won’t make her happy, and so instead she he releases them back into the world. Here we have a beautiful thing that we have made.

I am very excited to be giving it away.